Having come up through the junior and youth sections with his home village club of Beddau, Duane Goodfield, who was educated at Ysgol Gyfun Rhydfelen, gained a scholarship in sports science to Carmarthen College.

With International honours to his name at under 16 level, Duane joined the Llanelli Academy in 2001, progressing to represent his country at under 18 and under 19 FIRA levels, taking part in the 2002 World Cup tournament in France. 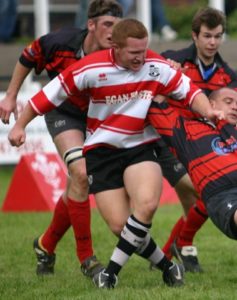 Still only eighteen years of age, Duane signed up for Pontypridd at the commencement of the 2003/04 season, and was immediately called up for training with the Celtic Warriors, making a senior regional debut against London Welsh. Further representative honours came Duane’s way, touring with, and captaining the Wales FIRA under 19 team in their 2004 World Cup campaign out in South Africa.

Having represented Pontypridd in their premiership campaign of 2005, Duane stepped up to under 21 status with Wales, touring to Argentina for the age group World Cup, and was given a full time academy contract with the Blues region.

Taking full advantage of the opportunity, Duane went on to become a full member of the Blues senior squad in the summer of 2006, whilst remaining linked to Pontypridd.