Hailing from the heads of the Valleys community of Rhymney, Dan Godfrey played at junior level for Abertillery before joining up with the Ebbw Vale Steelers Youth team. During his rise through the age groups there were representative honours gained, for East Wales at U16, U18 and U19 level, and with the Welsh Presidents XV.

A step up to senior rugby came in 2002, with a full debut for Ebbw Vale against Llanelli, and with further honours gained for East Wales U21s and an uncapped appearance for Wales U21s against England.

In the summer of 2003, Dan travelled to New Zealand to play senior club rugby for Poneke in the Wellington provincial championship. 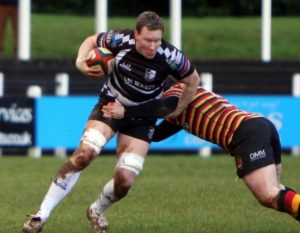 Upon his return to Wales, there followed a move to join Pontypridd, where Dan soon made a big impact as a ball carrying back row marauder. Having been a regular in the Ponty line up, and captaining the club in the Welsh Cup final of 2005, Dan Godfrey departed in the 2005 close season to pursue a career with the Llanelli Scarlets regional entity, before moving to Cardiff RFC in 2009, captaining the club.

Dan made a welcome return to Pontypridd colours in 2011, and continuing to lead by example, was nominated as vice captain during the 2013 – 2014 season.

A serious neck injury forced Dan Godfrey into retirement at the end of the 2016-17 campaign, but moving straight into the role of Team Manager.