Ernest George played club rugby for a variety of teams, but is most associated with Pontypridd and Cardiff. George was capped three times for Wales between 1895 and 1896. 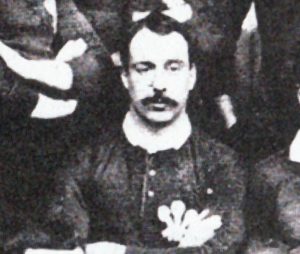 Ernest was born in Llantwit Major but at an early age moved with his parents toPorth, where his father owned a carpenters shop.  He started his ‘football’ career with Penygraig, who were a rising team in the valley then joined Pontypridd in 1893, and in the summer of the following year he was elected club captain.  Representative honours soon came his way – after representing Glamorgan he gained two Welsh international caps as a forward, against Scotland and Ireland.  The following season he moved on to Cardiff, where he gained another cap, however, after less than a season he moved to Plymouth, where he represented the town club and Devon County. He also played for London Welsh on a tour of the North of England.

In 1897 Ernest returned to Pontypridd, and was made captain for the 1897-98 season. After retiring Ernest became a publican, runningthe Plasnewydd hotel in Bargoed and the Oxford Arms, in The Hayes, Cardiff.  Ernest George passed away on the 28th of November 1952.