Kevin Gallagher came to Pontypridd from local club, Pontyclun. His first match being one against the then-South Glamorgan side, Penarth, in December 1992.

Bench-bound for a few weeks, Kevin’s first start in a league game was against Llanelli at Stradey Park in November 1993. 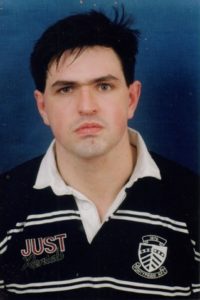 Kevin departed Pontypridd in the summer of 1994 to play for the Southland province in New Zealand.

After a brief spell at Treorchy, he signed for Clive Woodward’s London Irish side in December 1994 after representing the Irish Exiles in the Irish inter-provincial championship.

Moving to Northern Ireland with his wife in 1996, Kevin went on to play for Ulster in 1996/97, before a serious back injury forced him to retire.