Cardiff born, and a Blues under 20 player at regional level, Aaron was a student of law at Cardiff University, having already represented the college in the Welsh Varsity game, and gaining representative honours with Welsh Academicals and Wales Universities. 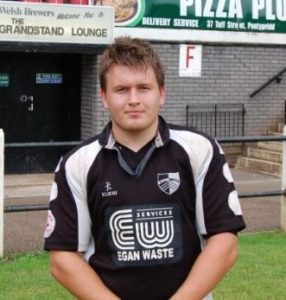 Aaron’s sporting prowess was highlighted by being nominated “Fresher of the Year” at University for 2006, the award contested by candidates from fifty sporting clubs within the college.

Still only nineteen years of age, Aaron gained further experience by joining up with Llantwit Fardre in the Asda Welsh Leagues in 2005, and was drafted on permit into the Pontypridd senior squad towards the end of the season, making his debut as a substitute in the away game at Llanelli.

Aaron left Ponty in 2007, moving to Merthyr RFC before becoming a member of the Bedwas squad in 2009.