A native of Cefn Hengoed in the Rhymney Valley, David Flanagan played at junior level for Ystrad Mynach and was capped at  Youth level for Wales, his immense promise as an influential outside half earning him a call up to the Pontypridd Academy, at only seventeen years of age, in 2002. 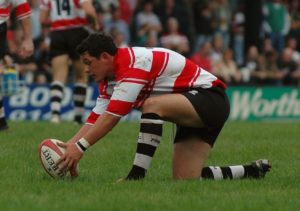 Dai’s meteoric rise through the ranks continued with a call up to the Pontypridd senior squad for the 2003/2004 season. Putting in some outstanding match winning performances, Dai’s potential was rewarded with a call up to the Wales FIRA under 19 squad for the Six Nations championship, and World Cup tournament in South Africa, in the spring of 2004, with the additional honour of captaining the team.

Having figured for the Warriors Academy, Dai was also selected to tour South Africa with the regional development team in the summer of 2004.

Becoming the pivot of Ponty’s midfield play in the club’s premier division campaigns, Dai went on to achieve further international honours with Wales at under 21 level, and at the commencement of the 2005 – 2006 season, achieveing full time regional academy status with the Blues.

The ensuing season proved to be another successful one for the unassuming “Dai Flan”, gaining further caps for Wales at under 21 level, making a senior regional debut for the Blues, and cooly slotting over an injury time drop goal to clinch the Konica Minolta Cup for Ponty at the Millennium Stadium. Dai then progressed from Academy status to senior registration with the Blues.

Dai departed Sardis Road in the summer of 2010,  contracted to the Ospreys region and in the meantime turning out for both Tonmawr and Bridgend in the Premiership.

In the summer of 2012 Dai Flanagan made a welcome return to his club of origin, Pontypridd and went on to re-establish himself as an influential playmaker and points scorer during the club’s phenomenal run of success.

In the summer of 2014 Dai Flanagan departed Pontypridd to join up with Premiership rivals Newport. He had made 148 appearances for the club and amassed 1,241 points.