R.G. Farr, better known to everyone at the club as “Benny”, made his debut for Pontypridd in 1946. He was only eighteen years of age at the time, and on leave from the Royal Navy. 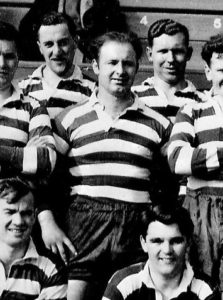 Thus began a lifetime’s service given to Pontypridd RFC, stretching far beyond the twenty representative appearances he made for the club.

Following his retirement as a player, Benny Farr maintained his association as a member of the Ground Committee, which he chaired for several years.

He was elected as “Clubman of the Year” in 1977 and in 1994, recognised as a true stalwart of Pontypridd RFC.