Hailing from Aberdare, Lee Evans initially joined up with Pontypridd in 2003 as a physically imposing back rower. Known to all as ‘Duck’ he gained a reputation as an abrasive attacker and in 2008 was attracted by a move to then Premiership pace setters Neath. 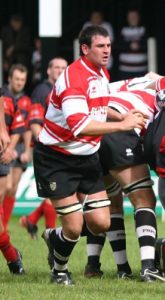 He went on to represent Cross Keys and Merthyr but returned to Pontypridd for three different spells in total, the latest being a cameo in the twilight of his playing career in 2017.

He recorded 133 appearances for Ponty over that fourteen year period, duly regarded as an influential player who always put his body on the line for the cause.