Hailing from Aberaman in the Cynon Valley, Ian had his first taste of rugby with Abercwmboi Juniors, he then went on to represent the club’s Youth team.

Having been a pupil at Blaengwawr Comprehensive, where the Buy as you View Schools Initiative organised training sessions with Pontypridd players, Ian joined up with the Ponty Academy in 2001, playing for the under 17 team. 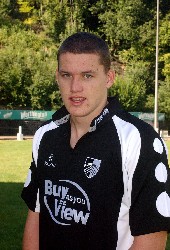 His immense potential as a dominant line out operative and effective ball carrier in the loose, saw Ian fast tracked up through the age groups, and indeed making a senior debut for Ponty in a friendly game at Caerphilly, having just turned eighteen.

Capped by Wales at under 19 level, and a member of the FIRA World Cup party that travelled to France in the summer of 2003, Ian was registered with the Ponty premiership squad, and was immediately called up for training with the Celtic Warriors regional set up.

The following year, 2004, Ian departed from Pontypridd to join up with Swansea. He then stepped up to join the Ospreys regional team, and became a mainstay in the Wales international squad, also selected for the British & Irish Lions.