Born and bred in Tonyrefail, Greg Evans progressed through the junior ranks of his home town club before moving on to join the Pontypridd Academy. 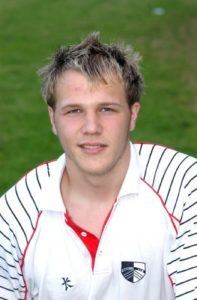 Impressing with his physical presence in midfield, Greg was soon called up to the ranks of the Warriors regional Academy, and becoming a regular for Wales at under 18 level in their four nations campaign in the spring of 2004. Further caps followed in an international tournament against Spain, Italy and Portugal, consolidating Greg’s status as one of the most potent centre prospects in Welsh rugby.

Having toured South Africa with the Warriors Development squad in the summer of 2004, Greg joined up with the senior Pontypridd squad for the commencement of the following winter’s campaign.

Greg departed Sardis Road in 2005, moving on to play for the Worcester Warriors Academy, before becoming a member of the London Welsh squad.