A native of the West Wales town of Carmarthen, Richard first came to prominence on the Welsh club circuit with Llanharan, being a key member of the team that took the club up the league ladder to the premier division. Richard’s contribution was highlighted with an impressive haul of twenty tries during Llanharan’s successful promotion season to the top level. 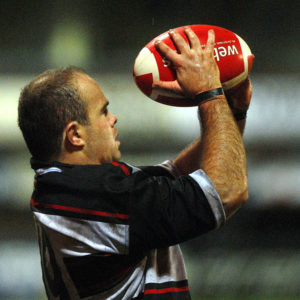 His efforts were rewarded with a move to fully professional status at English division one club Rotherham Titans, holding down the hooker position with the club during the 2004 – 2005 season before moving to play on permit for Swansea in the Welsh Premiership towards the end of the 2006 campaign.

Looking for a permanent return to Wales, Richard decided on a move to Pontypridd at the commencement of the 2006 – 2007 season.

Moving on at the end of the 2007 season, Richard returned to his hometown with Carmarthen Quins.