A product of the Llantwit Fardre junior rugby section, Jonathan was educated at Ysgol Gyfun Rhydfelen, from where he gained international honours with Wales Schools at under 18 level, whom he also captained.

Johnathan joined up with the Pontypridd Academy in 2001, where his performances as a hard hitting openside flanker with a phenomenal workrate earned a call up to the ranks of the Wales under 19 squad. 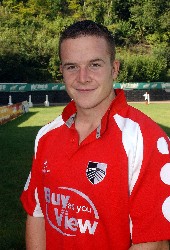 Although still qualified at the under 21 age level, Johnathan’s huge promise gained further recognition by being drafted in to the senior Celtic Warriors squad in preparation for the 2003 winter’s campaign.

Whilst employed as an Assistant Rugby Development Officer with the Buy as you View Schools Initiative Johnathan was drafted into the Pontypridd senior squad for the 2003/2004 campaign.

Following some sterling displays in the Welsh Premier division, Johnathan’s season was disrupted by a long term knee injury, only to fight his way back to recovery in time to captain the Wales under 21 squad in their World Cup campaign in Scotland in the summer of 2004.

Johnathan opted to leave Pontypridd for regional stablemates, Cardiff, at the commencement of the 2004/05 season.