Hailing from Ferndale in the upper reaches of the Rhondda Fach valley, Nicholas Eaves came up through the ranks of the Pontypridd Academy, initially playing as a second row, but then converted into a loose head prop. 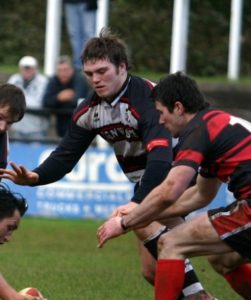 Having won international honours with Wales throughout the youth age grades, Nick was drafted into the Blues regional Academy, whilst playing for Treorchy Youth.

Epitomising the concept of a modern prop forward, tall and mobile with good skills in the loose, Nick was a key member of the Wales under 19 FIRA grand slam winning team of 2006. The following season he was allocated to the Pontypridd senior squad as one of their quota of Blues Academy players.

Nick was released by Ponty in early 2008, joining Llanharan in the second division aiming to reinvent himself as a second row.