Hailing from Maerdy in the upper reaches of the Rhondda Fach valley, Denzil Earland joined up with Pontypridd from Ebbw Vale in 1985. 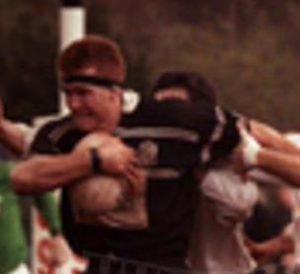 He soon established himself as a predatory openside flanker, with the ability to psychologically intimidate the opposition outside half to great effect.

Some dynamic performances earned Denzil a call up to train with the Wales national squad and made him a firm favourite with the Sardis Road crowd.

After leaving Pontypridd, Denzil went on to play for Hirwaun in the lower divisions, and became the host of the Bute Hotel in Aberdare.