Son of ex-Ponty favourite Robert Downes, Rhydyfelin product Rhys Downes joined up with Pontypridd RFC in the summer of 2007, having already earned his reputation with Pontypridd Schools and with Wales Youth. 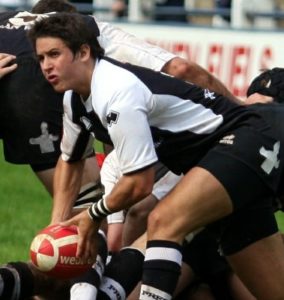 Whilst still at school, Rhys stepped up into the tough physical environment of the Welsh Premiership, enhancing his status as an elite member of the Blues regional Academy.

Showing the physical and mental attributes to contribute as a dynamic scrum half for his club and region, Rhys went on to gain further international honours with Wales under 20s during the summer of 2009.

Progressing to the Blues senior squad in 2010, Rhys remained linked to Pontypridd RFC.

Finding his opportunities limited with the Regional outfit, Rhys departed Sardis Road in the summer of 2012 to join Newport RFC, in the hope of further opportunities with the Gwent Dragons region. He later went on to play for Bedwas and Merthyr.