Robert Davies came down to Pontypridd from his local club Ystrad Rhondda in 1984 and remained as a stalwart of the club over the following decade. 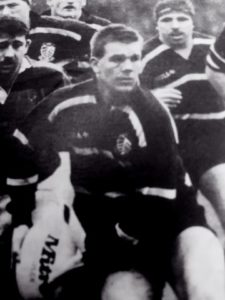 An abrasive scrum half, Davies was a handful for the opposing back row to contend with, often operating as an additional flanker for Ponty but also adept at getting his back line moving. He was a player who fitted in well with the style of play coached by the Jones brother, Clive and Chris towards the end of the eighties.