Born in the Carmarthenshire village of Nantgaredig, Mefin’s first rugby experience was gained at Ysgol Gyfun Bro Myrddin, before moving on to represent Carmarthen Quins at youth and then at senior level.

Whilst studying electrical and electronic engineering at the University of Glamorgan and travelling home every weekend to play for the Quins, Mefin gained representative honours with the Welsh Universities.

There followed a move to Dunvant in 1993 where Mefin played a prominent role in the club’s climb up the league ladder to gain premiership status and then in 1997 on to Neath. Gaining a worthy reputation as one of the form hookers on the Welsh circuit with his eagerness to lead the All Blacks’ marauding pack from the front, Mefin was called up to the Grand Slam winning Wales A squad in the 2001 season.

The following summer as Neath ventured on a big money transfer to bring back former Wales international hooker Barry Williams from Bristol, Mefin departed the Gnoll to move on to Sardis Road with a general consensus that Neath’s loss was very much Pontypridd’s gain. 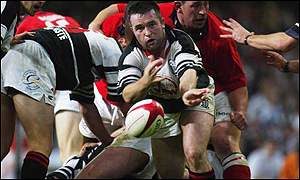 Mefin went on to captain Pontypridd, and became a regular with the senior Wales team, gaining the additional honour of leading his country. Mefin joined the ranks of the Celtic Warriors with the advent of regional rugby in 2003. He went on to represent Gloucester and Leicester before taking up coaching roles with Swansea, the Ospreys and Worcester.