Huw Davies, a product of Pontypridd Boys Grammar School, made his debut at age 19 and appeared on 99 occasions scoring 12 tries. He played in the first ever game to be staged at the Sardis Road ground on 4th September 1974. 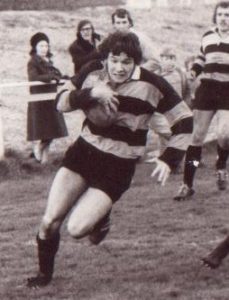 He returned to play for his local club Llantwit Fardre and subsequently became their Head Coach.

Davies went on to serve as an official of the Pontypridd Former Players Association.