Pontypridd born and bred, Tommy played for the town’s Schools and Youth teams before progressing to the ranks of the Ponty seniors. 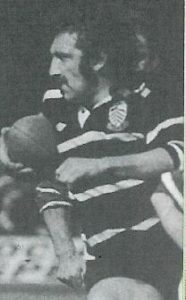 He helped the club to three league championship crowns, before taking the high road to Llanelli, from where he gained international honours with Wales and the British Lions. Tommy’s heroics on the Lions tour to New Zealand in 1971, and his part in plotting the demise of the same opponents for Llanelli and the Barbarians, were quite simply the stuff of legend.

Tommy returned to Pontypridd in 1975, captaining the team to another two league championships, and amassing a total of 404 appearances for the club.

He later went on to play rugby league for the newly formed Cardiff Dragons, before retiring from the game and progressing to be a director with Pontypridd’s long standing sponsors, Buy as you View.