Brett Davey first made his name as a soccer player achieving Welsh league status with Ton Pentre AFC. A change of code to rugby saw Brett figuring for Maesteg before he tried his luck with Pontypridd in the pre season of 1995 vying for a place on the wing.

After a solitary senior appearance Brett moved on to Caerphilly who were scaling the league ladder at the time and established himself as an attacking full back. 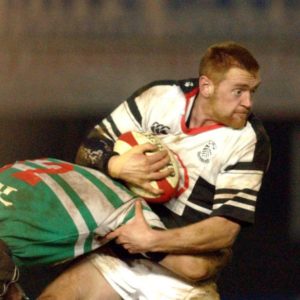 A prolific goal kicker, Brett broke WRU records in 1997 amassing 393 points for the season including a 42 point haul in one game against Rumney. Whilst helping Caerphilly into the premier division, Brett was voted “Most Overlooked Player” in the national press awards of 1998 and as Pontypridd looked for a replacement for the departing Kevin Morgan there followed a return to Sardis Road and a subsequent call up to the Wales A squad.

Brett will be well remembered for his heroics in the 2002 Welsh Cup final, scoring all of Ponty’s points, and hoisting over a last minute kick to seal a famous victory over Llanelli.

Brett left Pontypridd in 2003 to join Gwent Dragons, and after a brief stint with Bristol, returned to coach his home village club of Beddau. Following an offer from Coventry, Brett linked up with the West Midlands club as player-coach, and in 2008, his successes brought about an offer from National Division One’s Cornish Pirates.

In 2009, Brett opted to link up with former Pontypridd coach Lynn Howells as Backs Coach at Doncaster.