Phillip Daniels joined Pontypridd at the commencement of the 1974-75 season, from local club Mountain Ash having played for their youth and senior sides, and made his Ponty debut in a 3-0 win over Cilfynydd during January 1975. 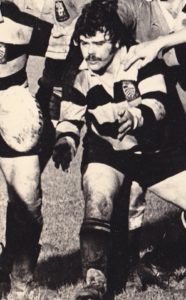 Daniels left Pontypridd in the summer of 1977, and emigrated to Australia, first arriving in the city of Melbourne. While in Melbourne, Daniels played for Kiwi RFC, Melbourne (Victorian Premiers 1977) and the Victorian Presidents XV.

Daniels went on to travel the continent, playing for various clubs around Australia before settling in Cairns, Queensland where he played for Teachers/Smithfield RFC and regularly for the Cairns and District Rep side.