Merthyr born Kristian Dacey found his way into rugby with his local club and then Abercynon.

A strong back row attacker, Kristian soon found himself playing for the Blues North age-groups and the formidable Merthyr Youth outfit, where he was part of the team that won the “Youth Treble” – the Youth Cup, the District Cup and the League. 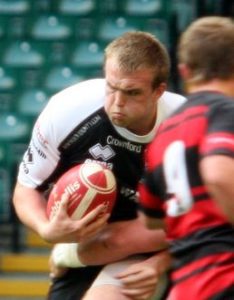 His vast potential was picked up by Pontypridd as he was given an opportunity to pull on the Black and White – joining elder brother, Gavin – in both pre and mid-season friendlies, making a series of barnstorming appearances in the back row. It was shortly after the second of these friendlies that Kristian signed on the dotted line for the Valley Commandos in the summer of 2008.

In early 2010, it was decided that Kristian’s progression in Rugby would be better nurtured with a switch to the hooker position, and the change was duly made.

After an outstanding season in the unfamiliar hooker position – a season which saw Kristian help secure the club the Welsh Challenge Cup, the Blues management decided to upgrade Kristian to a senior contract.