Merthyr born Gavin Dacey came up through the ranks with his home town club at junior and youth level, before transfering to Newport, again with the youth age group.

Having enlisted as a student of leisure and sports management at UWIC, Gavin represented the college, whilst still linked to the Newport Academy. A step up to senior rugby saw Gavin joining up with Ebbw Vale in 2004, playing for the Gwent club in the premiership and for UWIC in the first division. 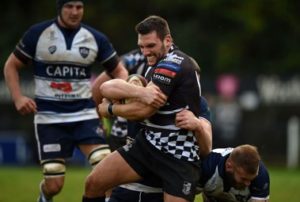 Arriving at Pontypridd as a trialist in the summer of 2005, Gavin showed up well in pre-season training and in the club’s warm up games, and was duly rewarded with a place in the Ponty senior squad for the season to follow.

Gavin’s performances for Pontypridd also earned him a call-up to the Wales Universities team in early 2006, not only representing his country at centre, but also having the honour of captaining the squad.

2009 saw Gavin head to the warmer climes of Hong Kong on the Wales Sevens circuit. Travelling as a reserve player, Dacey made his debut during the 14-5 victory over Japan.

By now a senior member of the Pontypridd squad, Gavin was elected as club vice-captain for the 2009 – 2010 campaign.

Having made 257 appearances for Ponty, most of those in a hugely effective midfield partenrship with Dafydd Lockyer, and having notched up 52 tries for the club, Gavin departed to join up with his club of origin Merthyr in January 2016.