Hailing from the Ely area of Cardiff, Luke Crocker developed through the junior and youth ranks of the neighbouring Canton club, gaining selection for Cardiff Districts. 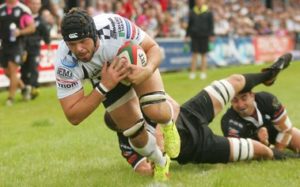 On graduating to senior level a move followed to Championship contenders Beddau. During a four season stint with the club Luke made his mark as an abrasive forager able to cover across the back row but predominantly as a blind side flanker.

An invitation followed to move up to Premiership level with Pontypridd with a view to fulfilling his undoubted potential as a dynamic back row impact player.

In the summer of 2015 Luke Crocker moved on to join Ebbw Vale.