A relatively late starter in rugby, Gerald first represented his local team of Ystrad Rhondda as a twenty year old at senior level, then playing in division five of the Welsh leagues. Developing a reputation on the Mid District circuit as a solid scrummaging loose head prop, Gerald answered a call from Cardiff, then coached by Lynn Howells, to bolster their depleted ranks during the World Cup year of 1999. 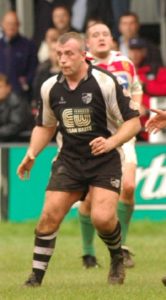 Having also played on dual registration for Treorchy, Gerald returned to Ystrad for a short spell,  before heading back down to the capital city, this time with Rumney, and linking up with coach and former Ponty skipper, Nigel Bezani.

Following a three year stint with Rumney in the first division, Gerald, who had gained representative honours with the Mid Districts and Glamorgan County, joined up with Pontypridd at the start of the 2003/2004 season, and was immediately drafted up into the Celtic Warriors regional squad. Gerald went on to be a mainstay of the Ponty forward unit for three seasons, making a total of 87 appearances for the club before leaving in 2006.