Cardiff-born, John Colderley first arrived on the senior Welsh circuit with Newport in 1996.

Following brief spells with Neath and Moseley, he joined up with Pontypridd in 1999, covering the wing and centre positions to great effect. 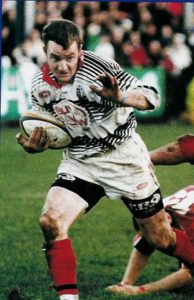 John gained international honours with Wales at student and under 21 level.

On leaving Pontypridd in 2002, John played for Premiership rivals Caerphilly.

A back injury in 2002 cut short John’s professional rugby career following which he set up his own Penarth-based energy performance company.