Hailing from Queensland, Australia, Brent arrived at Sardis Road after spending some time at London Irish.

A powerful presence on the field, Brent had a marvellous International pedigree, brother Matt was a legendary Australian International, and although Brent once held the ambition to play for his birthland, he then set his sights on committing himself to the red jersey of Wales. 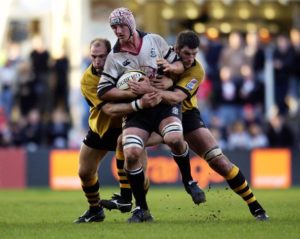 Capped for his adopted country on August 28th 2003 in a World Cup warm-up match at Wrexham against Romania, Brent left Pontypridd in 2003 to join the Celtic Warriors regional team, before linking up with the Ospreys region when the Warriors franchise collapsed.

He then went on to play for Sale Sharks in the English Premiership.