Chris Clayton represented his hometown club of Treorchy from junior to youth level, before receiving a call up to the Warriors regional Academy in 2003.

International honours followed for Wales at under 18 level, making his mark with tries scored against England, Italy and Scotland, and five touchdowns in one game against Spain. 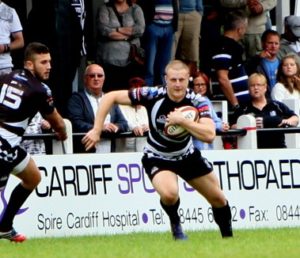 Still only eighteen years of age, Chris was called up to the Pontypridd senior squad for the commencement of the 2004/2005 campaign, recognised as one of the most exciting wing prospects in Welsh rugby. Further international honours followed with the Wales under 19 age group, and representation in the Blues regional Academy.

Cementing his place in the Ponty senior line-up, Chris scored a crucial try in the club’s 2006 Konica Minolta Cup Final success, and was duly selected for the Wales under 21 squad competing for the age group World Cup in France.

An abrasive perfomer on the wing, Chris enhanced his status as one of the senior members of the Ponty squad, going on to make 233 appearances in black and white, powering his way to 83 tries with a points tally of 420 .

Having made such a significant contribution throughout the semi professional era, Clayton departed Pontypridd in the summer of 2017.