Justin Burnell joined up with Pontypridd in 1991 as an abrasive blindside flanker, gaining international honours with Wales A.

His attacking prowess was underlined by a return of seven tries in his sixteen appearances for the club. 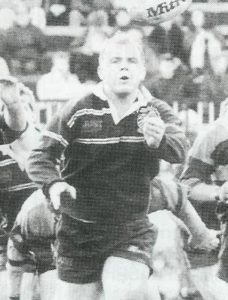 Following spells as a player with Bridgend, Newbridge and Treorchy, Justin took up coaching with his hometown club of Llantwit Fardre.

Justin returned to Sardis Road, initially as coach to the Academy, then taking charge of the Ponty senior squad in their 2003/2004 campaign. He then progressed to take on the role of Director of Rugby with the Blues regional Academy, before moving on to become Forwards Coach with the Blues.

Following stints with London Welsh and Rotherham Titans over the border, Justin Burnell returned as Head Coach of Pontypridd in the summer of 2017.