Born in Aberdare, and a highly rated soccer player while at school, Jon focused his attention on rugby joining the Merthyr Tydfil club in 1995. His progress was hampered by a knee injury but still figuring in the Ironmen’s rise to the first division.

Jon, along with team-mate Robert Sidoli, was invited to play on permit for Pontypridd during the playoff stages of the 1998 season. His direct approach and fearless defensive qualities in midfield led to a permanent move to Sardis Road in readiness for the following campaign. 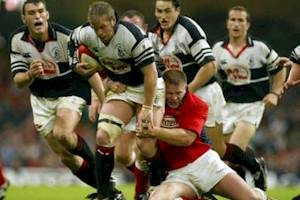 Earning a fearsome reputation as a hard tackling centre during Ponty’s European campaigns, Jon earned his first Welsh cap on August 28th 2003 in a World Cup warm-up match at Wrexham against Romania.

With the advent of regional rugby in 2003, Jon was drafted up to the Celtic Warriors squad, but still played on permit for Pontypridd in the Welsh premiership.

With the demise of the Warriors in 2004, Jon moved on to represent the Gwent Dragons.