Born in Aberdare, Aaron played his junior rugby for the nearby Resolven club, gaining international honours through all the Youth age levels with Wales. 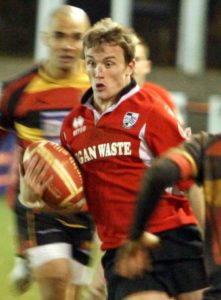 Graduating to senior level, Aaron had spells with Swansea and Neath, establishing himself as a versatile back-line player, able to cover at full back, centre and outside half. Making a major contribution as a kicker, both out of hand and at goal, Aaron enhanced his reputation following a move to Ebbw Vale, being elected as Principality Player of the Month for October 2008.

Playing an integral role for the World Cup winning Wales Sevens team of 2009, Aaron Bramwell made the move to Pontypridd RFC, joining the squad primarily as an outside half, in readiness for the 2009 – 2010 campaign.

Aaron departed Pontypridd in the 2010 close season to join Neath, after a season plagued by injury.