William John “Billy” Boston came to Pontypridd from Cardiff, and played one game on the wing against Cheltenham on 26th December 1952. 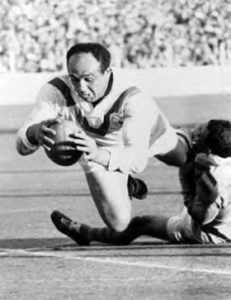 Billy, of course, went on to become one of the greatest ever rugby league players, playing for Wigan, Blackpool and Great Britain, and has the distinction of becoming a member of the British Rugby League Hall of Fame.