Toypandy product Darren Bool was captain of Pontypridd Youth and a Wales Schoolboy cap when he was called up to play for the senior team against Glamorgan Wanderers in 1992. 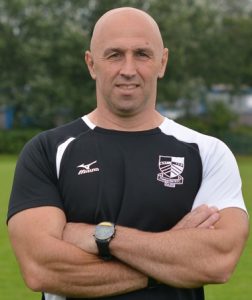 This was to be his only appearance for Ponty as he then went to study at Cardiff College of Higher Education (UWIC/ Cardiff Met) for whom he played, before a recurring back injury brought his career to a premature end.

Darren played a far more significant role when he returned to Pontypridd as conditioning coach in 2009, having gained experience in coaching at Pontyclun, Taffs Well, Llantwit Fardre and the Warriors Academy. He was also involved with the Blues age grade squads.

Darren earned plaudits for his sterling work in maintaining the fitness levels of the Pontypridd squad during a ten year stint, before departing to become Head Coach of Blues Women under 18s.