Having been a long standing player of international status with Llanelli RFC, Neil Boobyer joined up with Pontypridd for the 2003/04 season, also taking up the post of Development Officer with Buy as you View for the Bridgend area. 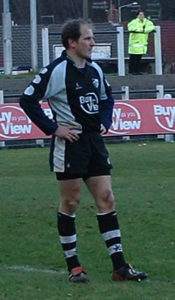 Putting his vast experience to good use, Neil contributed well to Ponty’s premiership campaign, slotting in at outside half and scoring some memorable long distance tries from the wing.

Neil then moved on at the end of the 2004 season, returning to Llanelli as backs coach.