The record books will testify to Colin Bolderson’s huge contribution to Pontypridd throughout the 1970s. Amassing a total of 27 tries, 222 conversions and 281 penalties, Colin was record points scorer in the 1975/76 season with an amazing tally of 386 to his name. 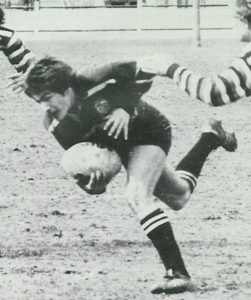 He won representative honours, playing for East Wales against the touring Japan team, and for a Welsh XV against Tonga in 1974.