In the summer of 2017 Diggy Bird was given the opportunity to sign up for Pontypridd. He made his mark as an influential playmaker and goal kicker at Premiership level. He became a crowd favourite over the following few seasons before deciding to step down from Premiership level during the global covid pandemic due to work commitments. 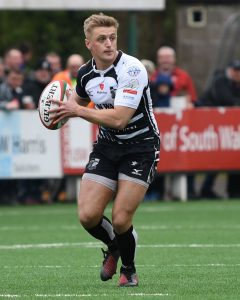 However, just prior to Christmas 2021 Diggy answered an SOS call from the club during a mid-season outside half crisis. He won Man of the Match thanks to a virtuoso kicking display as the team beat Carmarthen Quins 31-24 at Sardis Road, kicking 23 of the team’s points in December that year. He finished his second spell at the club having made a combined total of 48 appearances and scoring 398 points.