Hailing from Caerphilly, it was from Glamorgan Wanderers that Roger Bidgood won caps for Wales at youth level. He made the move to Pontypridd in 1983 establishing himself as a physical presence in midfield but his stay with the club being a short one. 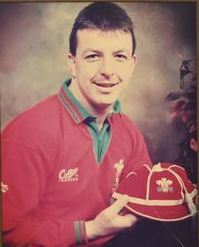 It was with Pontypool and Newport that Roger then came to the attention of the Welsh selectors, going on to win five senior caps for his country. After retiring from the game Roger, who was employed as a firefighter, returned to coach his hometown club Caerphilly.