Hailing from the village of Pentyrch to the north of Cardiff, Darren played his junior and youth rugby for his local club, before joining up with Dunvant at senior level in 1997, during the club’s stint in the Welsh premier division. 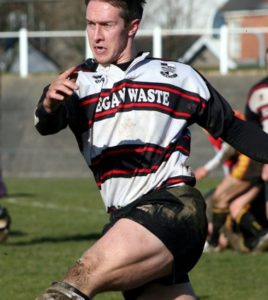 Taking up studies in sports science at UWIC, Darren played for the college team for four seasons, before being invited to join up with Pontypridd during the 2003/2004 season, initially on permit, but then on a permanent basis following a run of impressive try scoring performances on the wing. A mean turn of speed, and a reputation as a poacher of tries, earned Darren representative honours with the Wales senior sevens team during the 2002 and 2003 seasons.

Darren scored some memorable tries for Pontypridd, including a crucial score in the Welsh Cup final of 2005 at the Millennium Stadium.