Having previously played for Ebbw Vale and Sale, with an England senior tour in 1998 under his belt, Duncan Stuart Crampton Bell joined up with Pontypridd in 2001. 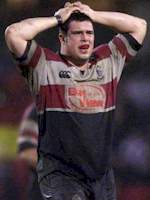 Playing a vital role in Ponty’s successful European campaigns, the burly but ever genial west countryman was hailed by the Sardis Road fans with the chant of “Duncan is a Welshman”.

Duncan left Pontypridd in 2003 to rejoin Bath, the club for whom he had played at youth level.