A native of Maerdy in the upper reaches of the Rhondda Fach valley, Lee Beach played for Tylorstown at junior level before moving down to join the Pontypridd Academy at under 17 level in the year 2000. 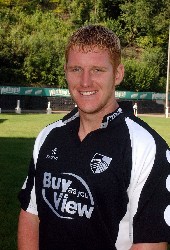 Proving to be an intelligent playmaker, and effective ball carrier off the base of the scrum and line out, Lee gained international honours with Wales under 21s at “A” level, and towards the end of the 2002 -2003 campaign was drafted into the Pontypridd senior squad.

He became an integral member of a young team who challenged strongly for league honours, and was voted “Player of the Year” by the Ponty Supporters Club for his efforts.

Lee then departed to join Neath, before moving on to London Welsh.