Born in Abercynon, Kristian Baller played his youth rugby for Merthyr before returning to his hometown club at senior level.

Gaining international honours with Wales at under 18 level, and touring with the Wales Crawshays under 20s, Kristian gained a reputation as an attacking full back or wing and a competent goal kicker. 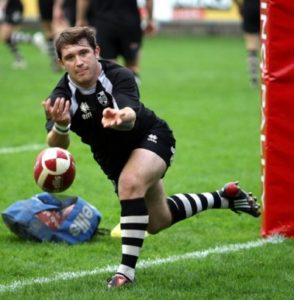 Invited to join Pontypridd as a trialist during the summer of 2006, Kristian was duly drafted into the club’s senior squad for the commencement of the ensuing season. Making some impressive try scoring appearances in Ponty’s league and campaigns, Kristian was called up to the Blues regional under 20 squad.

Playing across numerous positions during the 2008-2009 season, Kristian proved his versatility – able to cover almost any three-quarter position with an assured ease. His form impressed the Sardis Road support so much that Kristian was awarded the coveted “Player of the Year” award for his outstanding performances.

At the commencement of the 2009-2010 season, having been drafted into the Wales Sevens squad as a scrum half, Kristian was allocated that position by his club, concentrating his efforts in the number nine shirt.

Kristian departed Pontypridd at the end of the 2010-2011 season having amassed 304 points for his club, joining Gwent club, Crosskeys.