It will be ‘last tango at Pandy’ for Pontypridd as the league season ends with an away trip to Cross Keys on Saturday 12th May, the match kicking off at 2:30pm. 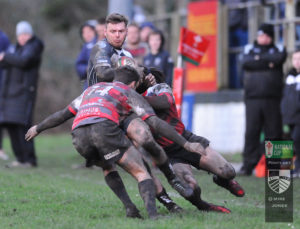 Ponty lie second in the table following an impressive run of seven consecutive wins, still with a mathematical chance of claiming the Premiership title albeit in the knowledge that Merthyr only need any kind of points return from their two remaining fixtures to retain the crown.

The end of season clash at Pandy Park will be the third meeting between Ponty and the Keys. Ponty won both league matches in the east conference, by 26pts to 12 at home then by 7pts to 16 away, but went on to lose an away National Cup first round tie in January by 21pts to 16.

Pontypridd welcome back prop Will Davies-King from Wales under 20 duties and lock Sean Moore from injury for the Cross Keys match. Scrum half Huw Rees is drafted in on permit from Nelson RFC to cover on the bench.