On Saturday 4th May 1996, 25 years ago today, Pontypridd faced Neath in only their third attempt to win the Welsh Cup. Ponty had lost to Bridgend in 1979, and got to the final the previous season against Swansea, but again came away the losers by 17-12. Pontypridd captain Nigel Bezani had already decided to retire at the end of the season, so it was Baz’s last chance to end his career with some silverware. 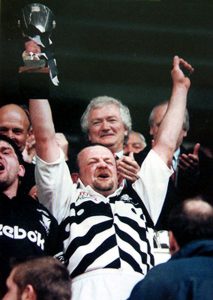 Pontypridd did not have a good record in the Welsh Cup since its inauguration in the 1971-72 season, often struggling against and even losing to ‘minnows’ such as Kenfig Hill, Llanharan, Treherbert, Treorchy, Llandovery, and Dunvant. In 1975 the Valley Commandos only managed to beat Llanharan on the toss of a coin, after an 11-all draw.

Llanharan were Ponty’s first cup opponents this particular season, on 16th December 1995, and the result was a massacre. The tie was played on a bitterly cold day at the Dairy Field with Ponty victorious by 102 points to 5, scoring 15 tries in the process.

Then it was home to Treorchy, who were captained by former Ponty hero Paul Knight. The game was much hyped with Paul and Baz interviewed on TV in a face-to-face spoof of the Mel Smith and Griff Rhys Jones ‘Alias Smith and Jones’ image. Treorchy were coming to Sardis Road determined to conquer us but lost by 41 points to 5.

A big victory at home over Maesteg and a narrow away victory at Newbridge set up a mouth-watering semi final against Llanelli at the Brewery Field. Early in the second half Ponty were trailing by 9-17, but somehow still looked comfortable. The pack was going well, and Jenks was controlling everything behind. Ponty then upped the pace, and four tries from Geraint Lewis, Paul John, and David Manley (two) saw them through to the final against Neath.

Dennis John called the final “the clash of the non-millionaires”, referring to the fact that both Ponty and Neath lacked benefactors who were starting to pump cash into some Welsh clubs. The starting teams on the day were:

Mark Spiller came on as the only replacement for Pontypridd in the second half to share in the glory.

Pontypridd dominated the first quarter, but errors gave away two simple tries to the opposition. Neath barely got into forward gear for the next half hour or so, but their two serious excursions into our half resulted in another two tries. Neath were 13 points ahead (9-22) with 36 minutes to go, and Ponty were lucky that the Welsh All Blacks didn’t have a goal kicker, otherwise we would have been dead when Neath scored their fourth try.

However, as in the Llanelli game, Ponty were the better side with the pack on top in the tight and the loose, Rowley dominating the lineouts and Jenks the master tactician behind the scrum. Neath hardly got out of their half as a Ponty fightback gathered steam, and something had to give. Then Paul John got a try, converted by Jenkins, to bring the score to 16-22. Jenks kicked a penalty, and it was 19-22 going into the last fifteen minutes.

Rowley won a line-out on the Neath twenty-two, Dale McIntosh took it on with a crash ball run, Ponty won the ruck, and Crispin Cormack and David Manley combined to put Geraint Lewis over. Jenks missed the kick, but it was 24-22 to Pontypridd. No one was going to take the cup away from them now, and a late try by Geraint Lewis sealed it. There were tears all round – in the stands and on the pitch – and there was a pot on the Pontypridd mantelpiece at last. 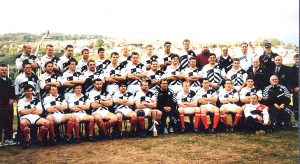 A special squad photograph was taken to celebrate the win, with the coaches and the so important support staff also included. The cup rests at the feet of Baz, who had become very possessive about the thing. Rumours were that he was taking it to bed every night! Baz was a very good prop and an equally good captain, and well deserved this small reward for the huge effort that he had put into Pontypridd rugby over the years. A hard, uncompromising man, Baz epitomised the ‘old style’ of rugby player, before the advent of the fully professional game.