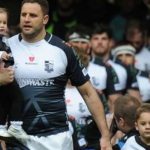 This coming  Saturday in the game against Merthyr, another one of our Pontypridd stalwarts reaches a massive milestone in his career with the club. Big Chris Dicomidis first ran out for Ponty in the 2004-05 season, and will now make his 300th appearance for the club.

Born on 14th September 1985, Chris played his junior and youth rugby for Pencoed before spending a season at youth level for the Tondu club. Although he played some of his early rugby at full back, at 6ft 6in and already well over sixteen stones it was inevitable that Chris would move into the pack. He went on to represent Wales in the FIRA under 19 age group, whilst also figuring with the Warriors and Blues Academies. Further international honours also followed with the Welsh Universities.

We first saw Chris in the pre-season games in 2004-05, when a tall, athletic 19 year-old started in the back row against Rhydyfelin. At the time Chris was studying sports and leisure management at UWIC, and represented the college side in the first division during the 2004-05 season. However, he was called up for a number of appearances on permit for Pontypridd in the league and cup that season, and his first Premiership appearance was on 30th December 2004 against Caerphilly.

Chris joined the Pontypridd senior squad at the commencement of the 2005-06 season, and a good run of form was rewarded with a call up to the Wales Under-21 squad, with which Chris won caps during the Six Nations campaign and in the World Cup tournament in France. He rapidly became one of the first names on the Pontypridd team sheet, and has remained so ever since.

Chris has made his mark as a towering ball winner in the lineout, and marauding forward in the loose. His influence on the field of play earned him the nomination as Pontypridd captain in 2011, leading the club to unprecedented success with a series of league and cup triumphs. Then, having been honoured as Welsh Rugby Writers and Premiership Player of the Year, and being called up to play for the Barbarians, Chris was given the opportunity to turn out at regional level for the Blues. He was drafted into the regional squad in 2013, while still linking up with Pontypridd at club level.

Chris also elected to represent the country of his forefathers, Cyprus, at senior international level, winning a few caps and scoring a couple of tries along the way. Then, in the summer of 2016 Chris made a return to the ranks of Pontypridd RFC, rejoining the squad as a hugely experienced forward -still one of the first names on the team sheet. Thank you, Chris, for all your efforts for this wonderful club of ours, and long may you continue to wear the Pony jersey with pride.