Rhodri Jones signs up for Ponty

Pontypridd RFC has significantly bolstered its forward unit with the signing of flanker Rhodri Jones, who joins from Championship side Pontypool. 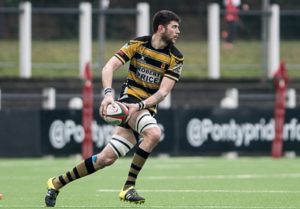 The 28 year old stands at 6ft4in and will offer a rugged physicality to the Ponty back row.

Hailing from Treorchy and capped by Wales at under 19 level, Jones initially played for Pontypool in the Premiership before moving to Ireland in 2013, representing the Lansdowne club.

A return to Wales entailed a move to Newport, before Jones again joined up with Pontypool in 2017.

Welcoming the latest squad addition, Pontypridd team manager Dan Godfrey said: “Rhodri Jones is a very good signing for us. He is an abrasive player with plenty of experience at Premiership level. He will add some steel and doggedness to our back row.”