It is not known whether Pontypridd RFC, during its long and illustrious history, has ever had a top operatic singer in its senior squad, let alone a member of the Gorsedd of Bards, but it has now.

When hooker Rhydian Jenkins joined up with Ponty from Cross Keys over the summer, he brought with him a rugged physicality which was off-set by a melodious singing voice.

The Llynfi Valley boy had previously played for Tondu, Cardiff University and Carmarthen Quins before spending a season with Cross Keys. The strapping six foot twenty-two year old then made the move to Sardis Road in readiness for the current season.

Rhydian’s accomplishments as a singer are far too numerous to mention, having won folk and classical competitions in the Llangollen and National Eisteddfod, including the Blue Ribbon award in 2018 and the Lady Ruth Herbert Lewis Memorial Prize this year. He has also appeared in the Royal Albert Hall and this coming weekend  will be contesting the prestigious Bryn Terfel Scholarship, which will be broadcast on S4C. 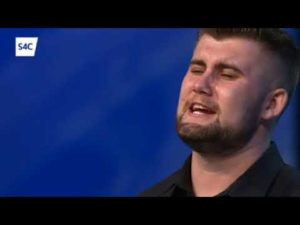 The top tenor is now commencing studies in Music Performance at the Welsh College of Music and Drama, with ambitions of launching a career as a classical operatic singer. He is equally intent on progressing as a rugby player with Pontypridd.

“I’ve settled in well at the club” said Rhydian “and there is a togetherness amongst the squad which makes it easy to integrate. There is also keen competition for selection which is good.”

According to the cultured front rower, his vocal talents have not yet been called upon at club level.

“The boys have made a few comments about my singing but all in good taste. I expect the real test will come on our first away trip – I might be called up to belt out a Pavarotti or a Paul Potts number on the bus. I’ve heard the standard is good so I just hope I’m up to it.”

Ponty supporters will be keeping an eye, and an ear, on their new hooker, and hoping of course that he’ll be singing when they’re winning.