Pontypridd host valley rivals Merthyr in round three of the Indigo Premiership Cup Eastern pool on Saturday 2nd October, the match kicking off at 2:30pm.

Both teams have had similar starts to the new season with a record of one win and one defeat from close-fought encounters. Merthyr are third placed in the pool rankings, two bonus points ahead of fifth placed Ponty.

It was away at Merthyr that Ponty played their final league fixture before the Covid-19 pandemic took over, back in March 2020, and on that occasion posted a creditable 27pts to 36 victory to complete the season’s double over the Ironmen, having won by 31pts to 7 at Sardis Road the previous November. 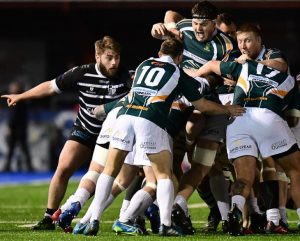 Going into the high-profile valleys derby Ponty are carrying a number of injuries incurred during two hard fought games against Newport and Ebbw Vale. Undergoing concussion assessments are no8’s Sam Evans and Joe Miles whilst lock James Little is sidelined with shoulder joint damage. Experienced lock Chris Dicomidis is away on domestic leave.

Centre Ceri Morris is given a competitive debut by Ponty, whilst Wales under 20 no8 Evan Lloyd is drafted in from the Cardiff Rugby regional academy to step into the back row.

Fans are reminded that the Pwllgwaun end remains closed and anybody who has yet to pick up their season ticket can do so before the game. Prior to kick off the clubhouse will be showing live football where Manchester United take on Everton with the game kicking off at 12.30pm. Live rugby will also be on the big screen when Leicester Tigers take on Saracens with the game kicking off at 3pm. After the game there is live entertainment in the clubhouse where acoustic/electric duo It Takes 2 will be performing, starting at 6pm.

The Pontypridd team selected to face Merthyr is as follows: