Ponty made the best possible start, a line-out drive powering over the whitewash for debutant prop Ross Davies to claim a try which went unconverted. The lead was however short lived as RGC replied in kind, working their way upfield for prop Jordan Scott to crash over from close range, outside half Billy McBride adding the extras. 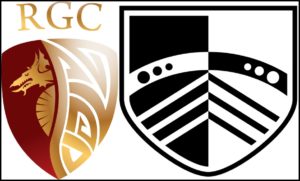 There were scoring opportunities in a tight contest, Ben Jones off target with a penalty for the visitors but his opposite number Billy McBryde cantering in under the posts following good support work and then converting his own score. Ponty again applied pressure and Ben Jones this time accurate with a kick at the posts. The visitors ended the first half strongly but were too lateral in their approach and unable to trim an interval deficit of 14pts to 8.

The second period began with RGC camped in their opponents’ twenty-two but the Valley Commandos holding firm in defence. Ponty were however undone after conceding their own line-out possession, the North Walians moving the ball along the backs for winger Afon Bagshaw to cross in the corner.

Turning defence into attack, Ponty looked for a breakthrough as Dafydd Lockyer fed winger Dale Stuckey to run in, but his try chalked off for a previous knock-on. RGC made the most of their opportunities, hooker George Roberts powering past some passive tacklers to claim the bonus point try which Billy McBryde converted. Ponty were again denied a score as the home side were serially penalised, Stuckey squeezing in at the corner but adjudged to be just in touch. The home team continued to infringe, replacement Rhys Roberts seeing yellow following a collapsed scrum, but his team holding out for victory by 26pts to 8.