Ponty boosted by win over Ebbw 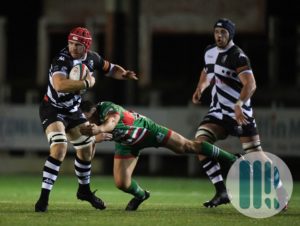 Two early tries gave Ponty a flying start but it was then a case of holding their nerve and grinding out the win by 32pts to 25.

The heavy rain could do nothing to dampen the spirits in the Ponty camp following the contest.

Try scoring flanker and man of the match Morgan Sieniawski was in celebratory mood after the final whistle. “It was good to bounce back from the RGC defeat last week with a bonus point win, and good to see the boys front up against difficult opponents” said Sieniawski. “I think we all put in a good performance, from 1 to 23, and coped well with sometimes difficult conditions when the ball was like a bar of soap.

“We were disappointed to concede a soft try late on but the bonus point win was in the bag. We have come on in leaps and bounds from last week but need to carry on the momentum now with a trip to Bridgend coming up next which will not be easy.”

Ponty forwards coach Lee Davies was happy with the win against one of his former clubs. “Just to get a winning result against Ebbw was pleasing after the disappointment of the previous weekend at RGC. We still have a long way to go in terms of consistency and improvement. Many aspects of our game need to be worked on, but we scored some nice tries tonight and if anyone would have offered us a bonus point win beforehand, we would have gladly taken it.

“The win has shot us back up the table which just shows how tight this league is and how very important results like this are.”