The new Pontypridd RFC rainbow shirt, in support of the NHS and the incredible commitment of its front-line staff during the current Covid pandemic, has made an impact far and wide, even becoming a favourite with staff at the Glan Clwyd Hospital in North Wales thanks to cancer patient Paul Hardy. 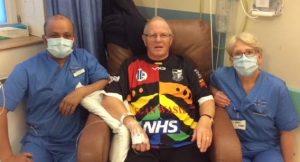 Retired businessman and hotelier Paul Hardy, originally from Cheshire, lives in Amlwch on Ynys Môn and makes a daily three hour journey to Glan Clwyd Hospital with his wife Diane to receive treatment for throat cancer, treatment which he himself has described as the very best.

A long-standing acquaintance and former colleague of Ponty supporter David Gooch, Paul got to know about the new rainbow shirt and immediately purchased one, making a point of wearing it on his journeys to hospital. The positivity he has projected in fighting his illness, and doing so in his multi-coloured rugby shirt, has made an impression on the NHS staff who care for him.

One of Paul’s ambitions on his long road to recovery is to meet up with the Pontypridd squad, having become a converted club supporter, when rugby resumes and Ponty travel north to play RGC – wearing his rainbow shirt of course.